Reagan Memorial Baptist Girls’ Secondary School was founded in 1941 by the Southern Missionary Board, USA. It is located at 29 Commercial Avenue, Yaba, Lagos, Nigeria. It started as a primary school in 1948 when the girls were transferred to the present site in the third year. 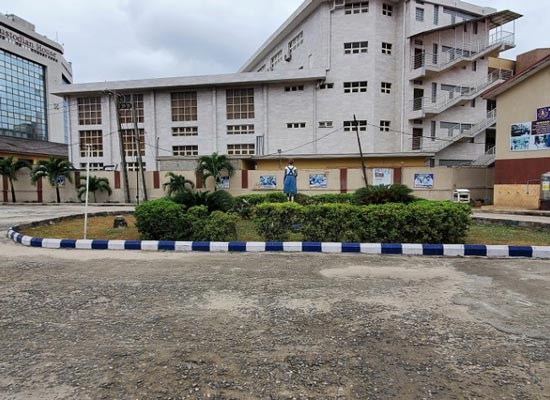 The school was named in honor of Ms. Lucille Reagan, a missionary who wanted the idea of having a separate Baptist high school for girls. Ms. Reagan passed away of yellow fever in 1936. Ms. Cora Ney Hardy was the first principal. The first African principal was Ms. Adeola Adegbite.

As a Christian institution, the focus was to develop girls as high intellectuals, good-spitted, morally-sound and highly-cultured in the society. Girls were divided into 4 houses: Lumbley(yellow); Agbebi (Blue): Sanders (Red); and Reagan (Green).

Ten-year-old Lucille listened as she sat in her wooden chair in her Sunday afternoon class at First Baptist Church, Big Spring. The year was 1907, and her teacher was telling the students about the missionaries’ work in Africa. Lucille was fascinated. Even as a young girl, she knew that her heart was connected to the people of Africa in a special way.

Two years later, Texas Baptists appointed their first missionary couple to Africa – Dr. and Mrs. B. L. Lockett. Lucille prayed for the ministry and, as she grew to adulthood, her ears and heart longed to hear news of Africa and to respond to the urgent cries of missionaries for help. After graduation from high school, when Lucille was seventeen years old, she surrendered to God’s call for a life of mission service. In order to prepare herself, Lucille attended Simmons College (now Hardin-Simmons University) in Abilene and Baylor University in Waco. She then enrolled in the Woman’s Missionary Training School at Southwestern Seminary in Fort Worth. She worked in the Texas Baptist Student Union, newly formed in 1920, and became the secretary of the Seminary’s Volunteer Band, whose members spoke of the love of Christ in churches throughout the state.

Following graduation in 1921, Lucille applied to the Southern Baptist Convention’s Foreign Mission Board (now International Mission Board) for a position in Africa, and was appointed to Nigeria on 8 June. She set sail with four other missionaries who were also bound for the same destination. It was on 12 October 1921 when Lucille caught her first glimpse of Africa and set foot upon the rich soil of Lagos. They began their journey almost immediately to Oyo, some 145 miles upland from the coast, first by train to Ibadan, and the rest of the way by truck. Lucille felt that she had finally arrived home.

In the next months and years, Lucille perfected her Yoruba, became a church planter in several villages, led the Baptist Young People’s Union, and served as vice-principal and then principal of the Baptist Academy in Lagos. She initiated a building program to expand the school in 1927-28, which mushroomed to more than 600 day students. Soon there was a “boarding department,” which Lucille also took under her wing. All of the children’s food each day was prepared on the stove in Lucille’s mission house.

Lucille also served as auditor of the Mission treasurer’s books, organized other schools at Ebute Metta, Ijebu Ode, and Apapa. She secured land in Yaba for a garden, led the textbook committee of the Nigerian Education Department, and helped to plan and write textbooks used by schools throughout the country. She was also the consummate hostess, extending hospitality in her home to other missionaries and traveling guests of the Mission. She learned the Hausa language, served for a time as editor of the Nigerian Baptist paper, held Bible classes twice weekly in Lagos churches, and petitioned her father to purchase and send her a car, which he did in 1935. This car provided easier travel to mission points for all of the missionaries.

For many years, Lucille had been concerned about the fate of girls who had no opportunity to attend school. In the spring of 1937, Lucille found and bought a piece of land in Yaba, Lagos, upon which were built, in the next eight years, the Reagan Memorial Baptist Girls’ Secondary School and the Yaba Baptist church.

Just a few days later, on 6 July, Lucille also came down with the fever and was moved to “Rose Cottage,” the home of the hospital’s nurses. There she died in her sleep on 12 July 1937. Her body was laid to rest by the side of Frances Jones in the little hilltop cemetery just north of Ogbomoso. Lucille’s life phrase, “in His might,” pointed to the One who had called, equipped, and strengthened her to accomplish the tasks He had assigned for her life.

Today, the Reagan Memorial Baptist Girls’ School and Baptist church, Lucille’s last endeavors, are still flourishing in Yaba, Lagos. In addition, the Reagan Old Girls’ Association, was birthed, and now give back to the school that provided such a solid Christian foundation for them all.

We honor Lucille Reagan and Francis Jones, whose investment of love and life in Africa still inspires gratitude to God for the unspeakable joy of serving Him.